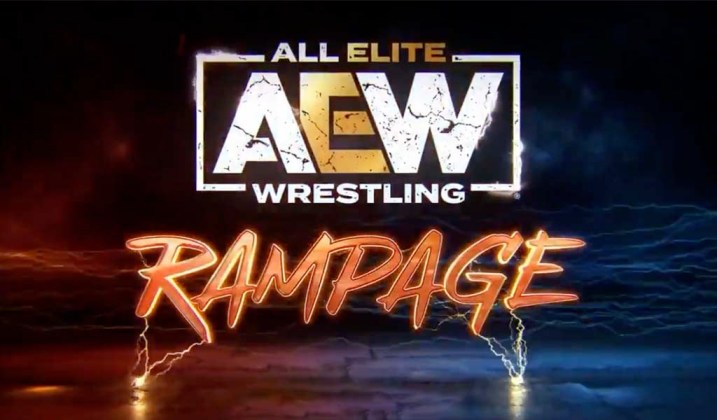 That’s the joint-lowest demo in the show’s history, to go
along with its worst ever cable position. After watching
last week, not at all surprised.

It’s Friday Night, and you know what that means… it’s time
for our Rampage Review!

JR once again welcomed us to Dynamite. That is not a typo.
The guy’s been through some stuff so I didn’t mention it
last time but that’s twice in quick succession. Unlike
Dynamite, Rampage thankfully came to us from the Prudential
Center, because that crowd Wednesday needed an obituary.

Joined by Schiavone, Jericho and Excalibur, they ran down
the show.

(The final of this tournament will now take place next
Wednesday, rather than at Full Gear. While the semi vs Cage
will be on the pre-show.)

Jericho was the only announcer not surprised that this began
backstage despite Starks saying he’d do just that Wednesday.
Archer dominated until attacking random people, leaving an
opening for Ricky, who led Archer through the curtain and
into the arena.

Both were dressed for a fight rather than a wrestling match.

Quickly back on top, Archer dragged the smaller man up the
steps into the fans where they continued to brawl until
Starks launched himself back over the guard rail via diving
forearm.

Reciprocating, Archer pulled off essentially the same move,
finally dragging Ricky into the ring as the bell rang.
After a brief flurry from Starks, Archer planted him on the
apron with a chokeslam to bring the break.

‘You know who’s going to be ROH champion after the show
tomorrow?’ began Jericho, who’d barely got the words out
when Schiavone deadpanned ‘Bryan Danielson’. These two are
great together.

Still well in control, Archer choked the younger guy in the
corner before firing in shots as a ‘Let’s go Ricky!’ chant
briefly got going. Dangerously close to a Blackout, Starks
fired back, freeing himself on the buckle, from where he
launched a diving shoulder, following up with a big
clothesline to finally take the big guy down. A tornado ddt
attempt was blocked; Archer absolutely drilled Ricky with a
lariat for a close two.

Schiavone mentioned an interview he’d done earlier with
Jericho & Sammy, noting that when it aired he wanted Chris
to watch Sammy’s reaction after he walked away. Tony’s out
here droppin’ dimes.

To a duelling chant of ‘Let’s go…’, Archer hit a clubbing
blow to the back, Starks ducked under a clothesline, this
time hitting the tornado ddt for two. Then set up the
Rochambeaux; Archer flippantly shook him off, then went for
a pounce, which Starks kinda avoided (he was certainly meant
to) before hitting a Spear as Archer attempted a big boot,
for the win.

Post-match, Brian Cage came out, distracting Ricky and
leaving him open to be chokeslamed onto the ring steps by
Archer. The former Team Taz-ers will go at it tonight on
the pre-show.

This was just there. Not much happened, a lot of brawling
in the crowd. Starks never took his shirt off. Suggesting
he might not be 100%.

The aforementioned interview aired – Schiavone with the Sex
Gods. The champ reiterated that at some point in the match,
the BCC boys will turn on each other, whereas he and Sammy
guarantee that the belt will remain with him. Jericho left,
Guevara said ‘We’ll see about that.’

On comms, Jericho tried to cover by saying Sammy has a lot
of dreams etc.

It’s a day ending in ‘day’, so no-one cared about Lee
Moriarty or his awful music. El Diablo Guapo got a nice
response. This crowd are already far more enthusiastic than
on Dynamite.

An aggressive lockup ended with a Moriarty cheapshot, Hook
dived for a double leg, thinking submission as Moriarty
fought him off and backed away into the corner. When they
met in the middle again, Hook landed a judo throw, rolling
through looking for a wristlock, maintaining his grip into a
northern lights suplex. Very, very smooth.

An elbow to the face shook Moriarty free – very briefly –
Hook coming straight back with a float under into a gut
wrench suplex, the youngster posing before a receptive
crowd. Until Hathaway interfered, leaving him to be blasted
by a Moriarty big boot.

Laying in crossface shots to a downed Hook as we returned,
Hook then took out Moriarty with a lariat as he rebounded
off the ropes, blocked a right, laying in a barrage of
bodyshots as the ref called for a ropebreak. A hiptoss
followed, back-heel trip, up into a fisherman throw.

This kid really is just so smooth the way he chains things
together.

Another cheap shot from Lee bought him space to deliver a
diving knee off the top to the back of the head. Racing to
cover, Moriarty got two, transitioning straight into the
kimura lock. This time Hook got the rope break, Moriarty
sweeping him into a cradle as he got up for a second two
count.

Then into the Border City Stretch. Hook rolled the hips,
out and up into the Redrum. Night night.

Really enjoyed this. Hook absolutely dominated a guy who
got more against Moxley last week.

Footage aired of Silver’s interference in last week’s
Rush/Bandido match. Leading to Schiavone backstage with
Silver, Ten, Rush & Jose. The latter of whom painted it as
Silver costing Ten a title shot (Rush had promised him one
when he won the Eliminator tournament and then the AEW
title).

Silver denied this but admitted to costing ‘Ruuushbag’ a
shot. Jose said that Silver didn’t take things seriously,
challenging him to a tag. Silver said ‘us two’ will beat
you, at which Ten took umbrage – must be having a bad week.
Rush then got in Silver’s face, cutting a promo in Spanish.

We were shown footage of Athena essentially turning heel
over recent Darks by attacking her opponents after the bell.

So, instead of firing her for taking liberties and beating
up an enhancement talent, they’ve turned it into a
storyline. Interesting decision in a company where
discipline has been lax, to put it mildly.

While a Madison Rayne promo aired, Athena had attacked her
from behind as she posed on the ropes. The cringing started
early as Athena almost dropped Rayne out of a wheelbarrow
position, finally managing to fling her into the guardrail.

Then continued as Athena sold after a delayed suplex which
she had performed. The commentators had to speculate that
Rayne must’ve turned it into a ddt. Rayne then ran through
her with a couple weak-looking clotheslines, set up
CrossRayne, Athena fought out into a flipping stunner, then
hauled her into an off-the-shoulder chestbreaker for the
win.

Short and still sucked. Post-match, Athena popped Aubrey in
the mush as she tried to drag her off Madison. I repeat, a
mid-level, at best, performer took liberties in the ring and
they rewarded her with a storyline. Mercedes Martinez then
came out to no reaction whatsoever. Athena took a powder.

The only thing the crowd cared about in this whole sequence
was Aubrey being cheap-shotted.

Backstage with Renee, the Best Friends and the Factory. We
were shown QT piledriving Danhausen on the steps last
Friday. Cassidy challenged the Factory to a 5-on-5, QT said
there were only three of them as Rocky Romero stepped
forward.

Protesting that this was still only four, Chuck handed Renee
a videotape – ‘What am I supposed to do with this?’. ‘Watch
the spooky video, we’ll see you tomorrow,’ replied Trent.

The video was Danhausen doing some stuff, ending with him
dropping a pile of teeth on a table. Chuck handing over a
tape was amusing, but this was supposed to be a bunch of
people pissed at a guy who’d injured their friend.

Another HOB video – a voiceover talked about a world full of
‘idleness, vanity and complacency’ as footage aired of the
four destroying a bunch of people in the dark. ‘Members of
the House of Black, please… rise’.

Ortiz spoke for Eddie, saying they were ready and quoting DJ
Khaled. Takeshita said it might be a dream match for them
but it’d become a ‘nightmare’.

Backstory: Kingston always wanted a match vs Akiyama, who
found out and made it happen

Kingston and Takeshita got us going: lockup, back away,
‘Eddie’ chant as they locked-up once more, intensely,
Takeshita go-behind, switch to a headlock from Kingston, who
slipped out, Takeshita couldn’t budge him with a shoulder
block, tried again and ate a belly to belly.

Leaving Kingston to tag his partner then race across the
ring to cheap shot his idol Akiyama on the apron. The
veteran in via tag, he quickly knocked down Ortiz then
reciprocated the cheap shot, sending Kingston to the
ringside mats. A couple elbows to the head and a piledriver
brought Eddie in to break things up – Akiyama didn’t even
wait for the contact, springing up to lock eyes with Eddie
as the ref cajoled the illegal man back to the apron.

Takeshita back in, he and Akiyama taking turns attacking
Ortiz in the corner, culminating in a combo belly-to-
back/reverse-bulldog as Takeshita got a two count. Trying
to fight back, Ortiz was dropped with a wicked right from
Takeshita as the ads arrived.

An Ortiz northern lights got two slaps of the mat as we
returned, quick tag to Eddie, Takeshita fighting, keeping
both at bay until hooked into a dragon sleeper then passed
to Kingston for a ddt and a close count.

The commentators were by now talking up the fact that Eddie
and Akiyama hadn’t faced off and it was distracting
Kingston. Who baited the youngster into an exchange of
chops, eyeing Akiyama as if trying to impress him – irish
whip, Takeshita ducked under before exploding with a leaping
clothesline. This guy’s acceleration is up there with Omega
& Ospreay.

Both made tags, boot to the face from Akiyama, Ortiz fired
up, launching chops and strikes but was big boot-ed once
more then hit with a leaping knee as Akiyama motioned that
it was over, setting up the Exploder.

Bringing in Kingston as the two finally went at it –
forearms and chops to the chest – leading to Eddie being
dropped by his idol, who was then taken out by Ortiz,
leaving Takeshita to attack but be caught in a powerslam.

Despite this, he popped back up, striking with a blue
thunder bomb but being dropped via a Kingston backdrop
driver, all four down.

Scrambling to their feet, Kingston & Akiyama were right back
to it, each hit an exploder but both popped right back up,
Eddie hit an enziguri but was blasted with a knee to the
face, taking him outside. Leaving Ortiz to be squashed in
the corner with a knee to the back of the head then hit with
the Exploder for the 1, 2, 3.