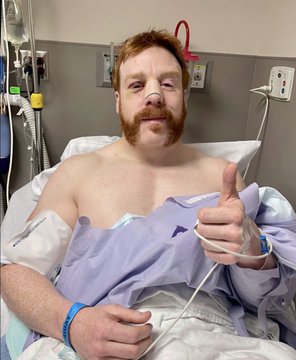 The injury took place on Raw after Humberto Carrillo caught
him with a stiff forearm, breaking his nose on the spot live
on television. Despite the injury, Sheamus still finished
the match. The injury brought back memories of John Cena
also suffering a broken nose in the match against Seth
Rollins and Cena soldiered on as well to finish the match.

This weekend, the Celtic Warrior shared images from his
hospital bed, posting two photos and “#AndStill” as text.
Despite a puffy face and a black eye, Sheamus looks to be in
good spirits…and his nose is straight again!

It’s unclear how long Sheamus will be sitting out of in-ring
action.